The Festival of Dedication, often called the Festival of Lights, is NOT one of the Appointed Times. There is no command to keep it. Yet I still think it’s worth the time to remember. This story has never, in my lifetime, seemed more needed.

Hanukkah is an amazing and timeless story. Even though it happened thousands of years ago, it still resonates across cultures, societies, families, and faith communities because we all love the story of an underdog who wins. 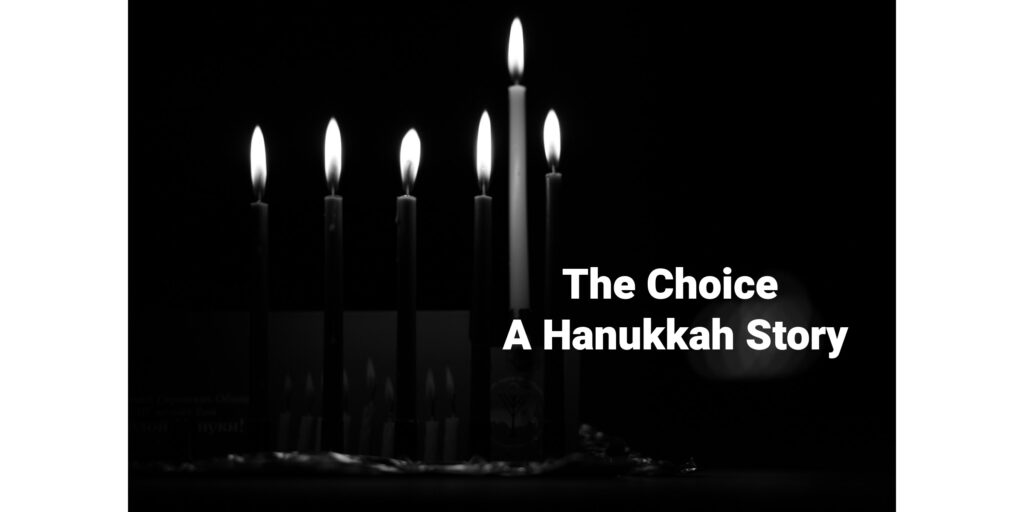 In this story, the Jews have been conquered by the Greeks, oppressed and they rise up, See, conquered people are often compelled, and many times brutalized into abandoning history, culture, even spiritual identity. The conquerors have a mandate to homogenize their fresh territory and eliminate opposition. It’s important to make sure you can hold on to the land that you have gained. Very few cultures, to be fair, have been peacefully assimilated into another culture. Regardless of scale, whether it is tribal, national, or international, conflict is very unlikely to be resolved peacefully. No matter how good it looks at the beginning. At one point there will come a time where you have to make a choice to stand for what is right and good in the face of what seems comfortable, expedient, or even peaceful.

Historically, In a revolution, when people have stood and said, “No More!” and it ends well, we do notice. Hanukkah is one of those times that is noticed and remembered . But only if you know the story.

So, the story is this.

It has been over a century since the Greeks conquered Israel. A nation of tribes now reduced primarily to Judah and a fraction of the nation David ruled. The year is approximately 167 BCE. and Mathias the Hasmonean Jew has been watching his people systematically decimated by cultural infusion, spiritual compromise, and finally outright idolatry and physical abuse. There is no record he was personally taking a stand other than moving into the hills perhaps? We do know he is away from populated areas and city centers.

For generations, the Greeks had been gradually imposing their faith, religious practices, and morality. Under Alexander the Great and Ptolemy it was mostly a benevolent and gradual imposition of Greek thoughts and philosophies. This insinuation, the subtle insinuation of ideals and express prompted a more gradual insinuation of ideals and expression prompted the transition from a more Torah observant community and toward a modern and socially acceptable Hellenistic way of living. Progress!

Eventually, however, as is the case with clashing world views, there came leaders who were far more antagonistic toward things that did not line up with their practices. And these kings went as far as to infiltrate the priesthood, further confusing the Jews. These kings defiled the temple, forbade circumcision and other spiritual and religious practices, and even set up altars to their own gods. Anyone who stood against them was persecuted. Even executed. Some graphic, brutal and horrific things were done.

Now on that scale I cannot relate to Matthias. I have not personally witnessed that. I know there is persecution happening throughout the world. But even on a small scale it is not hard for me to imagine their frustration with the gradual decline of their society. It’s not hard for me to imagine that world because many of the values I hold regarding family and faith, morality and society are challenged right now. It is not hard to imagine how fed up they might have been. In fact, for us it is a daily struggle. Social media, our inbox, our screens, even our grocery stores. It happens all the time. And we know the pressure to be drawn to and assimilated into a worldly identity. We feel the urge to compromise what we believe because we want to belong. We want to be safe. We want to succeed.

What’s harder to imagine, in that world, is the moment during the assimilation process when we say, “Hey! This far, no further.” When we do take a stand to reject a final encroachment. We make a choice that shocks us out of complacency.

With his five sons, Matthias had watched family, friends, and generations over the years embrace and adopt ways contrary to the regulations and practices established in Scripture.

Finally, they had to choose a side. And that time was ripe for revolution.

For the Maccabees that moment came when the Greek soldier asked Matthias and his sons to sacrifice to an idol. Their neighbor stepped forward to do that and Matthias stopped him. They had a choice to make and they could not sit in their house and shake their heads at the Hellenized Jews around them. They could not compare their own righteousness to failures witnessed on the streets or in their places of worship. This was not happening to the people around them now. It was happening to them. To him. To Matthias. In their village. At their front doorstep.

And he said no. He rejected the call to idolatry and led his family and other jews in a revolt that achieved the impossible.

A single moment of defiance against a worldview eager to destroy their faith was enough to spark a revolution that resulted in shocking victory.

The revolt lasted about 7 years, and many died. Matthias did. He did not see the temple restored. In fact, his son Judah, “The Hammer”, finished the fight. How many did not see the end of it? I do not know. But I do know they did reclaim the temple. I do know they purified the altar and instituted a celebration so meaningful we still celebrate today all over the world. I do know it was even remembered by Messiah Yeshua in John 10 and those of us who want to be like Him,to live like Him? We can identify with Him through this celebration as well.

22 Then came Hanukkah{Feast of Dedication}; it was winter in Jerusalem. 23 Yeshua was walking in the Temple around Solomon’s Colonnade.” John 10:22-23 TLV

There are a lot of stories about Hanukkah regarding oil and various aspects of the revolt. Many traditions have resulted because of those stories. Miracles stated that this happened.

One of those is that many foods are cooked in oil. So, obviously Hanukkah means donuts and latkes. Latkes are potato pancakes, and they are delicious!

Now, I do not know if the story of the oil being miraculously replenished until new oil could be purified is true. I do know that a lit menorah is part of the maintenance and function of the temple and It seems to have been extinguished at some point. Eight days to process new oil for the menorah is an accurate reading of the text so an eight-day celebration to remember isn’t a stretch. Not too far-fetched.

I just do not know if that miracle is true. As interesting as it might be.

The miracle of the oil is a remarkable idea that captivates our hearts and many sermons have been preached about it. To tell us that God can sustain us when we feel inadequate, and empty is true and shown to be true throughout Scripture. From the Israelites in the wilderness to the widow woman and her sons… Yeshua as he fed the crowds. The idea that God can make enough from a little is absolutely true. So, no, I have no need to argue with that or fight about whether or not the miracle happened.

I am sure the allusions to the Hanukkah story are meaningful with or without that dramatic element. But here is something I do know. Something that is undeniable and absolutely true.

Why do we remember Hanukkah? Because donuts. Obviously. Just kidding!

Because we have been given a testimony of a people who were given victory in the face of overwhelming odds.

They were not given victory so they could say they won. They were not given success because the Jews were now to dominate the Greeks and take their place on the international stage. They were given this moment; they were delivered because they dared to live and fight for the very thing, they were willing to die for. And that thing was obedience to Yahweh. To God. Honoring YHWH. Keeping His commands. Living in the ways He established in Scripture.

Hanukkah is important and worth remembering and worth celebrating. Then AND now. Because we will never be in a world that does not wish to assimilate us to look more like them and less like Yeshua. We will always be faced with a choice to compromise or to fight for truth and righteousness.

So this is a story worth repeating at least once a year and one we should be sharing with our children and with each other as well.

We have been celebrating the Feasts of. Yahweh and honoring Torah since 2005.  What a ride! 🙂 We are sharing our journey and our thoughts here through articles, links, and an occasional podcast.

We are on a journey. No one started at the same ti

Tis the season for food fried in oil!! Happy first

It's December. I'm tired of the meme wars. Here's

Full Disclosure: This is a social media observati

As we are coming up on the holiday season, for bet

We are not just who we think we are. We are able t

How it’s going. Praising Yah for a wonderful br

And so it begins.

Pecan crusted trout… What a lovely way to celeb

I am not gonna lie. This past week has been rough.

Just told Brian that this is my absolute relations

Round challah as we have traveled a year from the

Let’s do this! Next Monday is the day before Yo

What is chimichurri? It is bright green herby mag